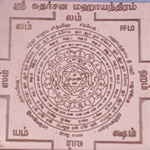 Sudarshana Yantra is something like a spiritual weapon to protect the human being during the period of their crisis such as mental agony, stress, un founding fears arising on matter concerning business, Vocation and enmity problem through known and unknown circle .This sacred plate with a circle sketch is presumed to be that of Lord Vishnu. When the effects of sudarshana mantra is energized, it picks up its responsibility to protect the interest of the persons who possess it. It acts and reacts as a security cover on any individual who has this during the perilous situation .It will encircle with its miraculous power who has this and will give sufficient mental and physical strength, courage and will power to manage any situation and also to arrest adverse effects on them.

To keep yourself away from such kinds of indirect evil castings and unwanted spells, it is better to safeguard yourself with the divine weapon-Sudarshana Yantra. This Yantra is given the power of shielding you against ill spells by mantras relevant to it. The owner of this Yantra will be promised with a shield against all ill spells and evil eye casts in whatever he/she does in life.