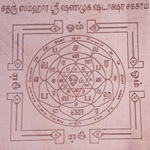 Kartikeya(Lord Muruga) is also known as Subramaniam, Skanda, Guha, Shadannana or Shanmukha(because he has six faces). He represents a person of perfection. He is the war God, the Hindu equivalent of Mars and Aries. He was created by all the Gods to lead the heavenly hosts and destroy the demons. He is the most masculine and fierce of all the Gods. Lord Subramaniam bestows all spiritual powers, particularly the power of knowledge and restore you with power to achieve your goals and desires.

Are you lagging behind in confidence and wisdom?

You can keep this yantra in a business or altar place and do the pooja. You have to chant this mantra for 108 times and with the energy of chanting you would be blessed with success in all your endeavors