Sri Maha Meru - Growth and Success in Family and Business 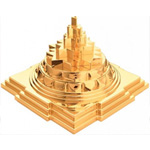 Sri Maha Meru represents the whole Universal Energy and the energy in every animate and inanimate object. Usefull for Growth and success of family and business. Ancient Scriptures indicate that the presence of Sri Yantra and/or Sri Maha Meru bestows Success, Mental Peace and Happiness through Health, Wealth & Harmony. It is also believed by many that besides producing a huge amount of positive energy, it also absorbs pollution. Sri Maha Meru correct both finicial growth and vastu Doshas. Therefore, the force which pushes man to worship the Yantras lies in the strong belief that these Yantras are created by this "Trinity themselves who are the creator, preserver and destroyer of the world respectively, who also control the Sun, the Moon, Planets and hence, the whole universe itself.

In the cosmos there are three states-Creation, Establishment and Destruction and these are represented by the three circles in the Sri Maha Meru which in itself is the symbol of the universe or cosmos. When this circle is elevated, it stands as a symbol of SumeruMountain balancing the whole universe and it contains all the worlds situated in the SumeruMountain, as described in Puranas. It is called "Meru Prastha Shree Yantra" and is the best of all.

Sri Maha Meru Yantra is the worshipping place of the form of the super goddess, Mahatripur Sundari. It is Her divine abode. All the 33 crores gods and goddesses are worshipped in it and all other religious adorations are done here. It includes all the conducts, all the learning and all the elements. The fruit of benefit that is gained after performing duly one hundred Ashvamegha Yajnas can be acquired by having a sight (vision) of the Shree Yantra.

There are some important points of Mahameru which gives various effect:

As per telephone communication, could you please update the price in Yantra for Maha Meru Yantra as price details mentioned below.