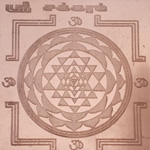 The worship of Devi in Shreechakra is regarded as the highest form of the Devi worship. Originally Lord Shiva gave 64 Chakras and their Mantras to the world, to attain various spiritual and material benefits. For his consort Devi he gave the Shreechakra and the highly coveted and the most powerful Shodashakshari mantra, which is the equivalent of all the other 64 put together.

It is said that in the beginning God, who was one, wanted to become many and enjoy himself. As the first step to creation he created Devi - the total cosmic Female force. For the male part, out of his left he created Shiva, out of his middle he created Brahma and out of his right he created Vishnu. That is why many regard the Devi as more powerful than the Trinities and hence She is called Parashakti or Paradevi - Para meaning beyond. Brahma created the universe.

Vishnu controls and runs the universe. Shiva along with Shakti is engaged in the eternal dissolution and recreation of the universe. The Bindu in the center of the Shreechakra is the symbolic representation of the cosmic spiritual union of Shiva and Shakti. Apart from that the Shreechakra also embodies countless number of deities and represents the whole of creation. Hence by worshipping the Devi in Shreechakra one is actually worshipping the highest ultimate force in the Tantrik form.

Shree Yantra or chakar - helps in clearing all the negative energies - standing in the way of Peace, Prosperity and Harmony and makes everything work for us in an orderly manner. This powerful yantra will lead you to access the goddess of wealth. The Shree Yantra is a symbolic form of all Gods and Goddesses. The Shree yantra was possessed by Brahma, the creator of the Universe and praised by Vishnu the lord of the Earth. Shree yantra is connected deeply with the Ancient Art of Vaastu and has been specifically mentioned in the "Vaastu Shastra". Your sincere prayers will accumulate the divine energy with money and other material comforts and wealth.

You can keep this yantra in a business or altar place and do the pooja .you have to chant this mantra for 108 times and with the energy of chanting you would be blessed with prosperity as per your desire.