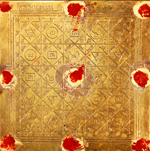 It is a very powerful yantra for Shiv Upasana and that bestows the worshipper with all round Success. This yantra contains the powerful Shiv panchakshri mantra "Om Namah Shivaya". Om Namah Shivaya mantra itself is made of beej letters as our scriptures say which includes different letters na, ma, shi, va, ya. This cyclic recitation is meant to invoke power/energy behind each beeja by initiating it like nung, mang, shing etc and then starting the mantra from that beej letter and completing it to rest of the letters in the mool mantra Om Namah Shivay.

You can keep this yantra at your office or altar place and do the pooja. You have to chant this mantra for 21/108 times and with the energy of chanting you would be blessed with the positive energy of Panchakshara Yantra.