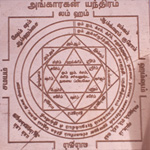 Sri Mangal Yantra helps the worshipper to overcome the above difficulties and one succeed in all his efforts to gain desires and lead a comfortalbe life. When Mars is malefic or one is of rash temprament, Mangal yantra/Mars yantra is very useful, it removes the evil effects of Mars like injury, accident etc. Those who are suffering from high blood pressure and those whose Mars is placed in first, fourth, seventh and tenth house shall keep this yantra at their homes or with themselves to ward off the evil effects of the planet Mars on them.

Mars Yantra refreshes the lives of

You can keep this yantra at your office or altar place and do the pooja. You have to chant this mantra for 21/108 times and with the energy of chanting you would be blessed with the positive energy of Mars Yantra.