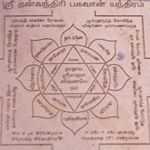 Lord Dhanvantari is in ancient Hinduism believed to be the father of medicine and health. Lord Dhanwanthari is idolized as the personification of Vishnu, also known as God of Ayurveda and there are numerous acknowledgments about him in the ancient Hindu scriptures like the Vedas and the Puranas. Sri Dhanvanthri God who appeared at the churning of the ocean is also known as the physician of gods. He is worshipped in a special manner by the physician community. He is the father of Indian Medical science and Ayurveda is ascribed to him. He is said to be the first physician and surgeon. Lord Dhanvantari is also worshipped in India as the God of health and immortality.

Lord Dhanvantri is the divine physician who brought with him the knowledge of health, long life. He was the Vaidya Ratna and a Divine Healer. The evolution of Lord Dhanvantari is a very rare occurrence. Placing Danvantri yantra is very beneficial for good health as it destroys the negative ions in the surrounding and brings the positivity and brings good health to the worshipper. This yantra control your body and soul through radiations. You can keep this yantra in altar and do the pooja .you have to chant this mantra for 108/21 times and with the energy of chanting you would be ratified by health problems.


How to use the Yantra in Altar?