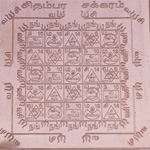 Chidambaram is combination of "chitt", which means conscience and "ambara" another name for "akash" (or "ether"). There is a chakra (Chidambara Chakra) which contains the Panchakshara or five-letters of Lord Siva-Nama Sivaya-on the wall to the back of this idol.There are five courts or Sabhas in the temple viz., the Chit Sabha, Kanaka Sabha, Raja Sabha or Durbar, the Nritta Sabha and the Deva Sabha. Chidambaram is identified as a cult of Shiva as the 'King of dancers (Nataraja)

Lord Nataraja danced in the Chit Sabha or the Hall within the temple. The five steps that lead to the Golden pillared hall or Kanaka Sabha represent the five letters-Nama Sivaya. The Raja Sabha is located within the thousand-pillared Hall. The Nritta Sabha demonstrates the Oordha Tandava dance of Lord Nataraja. Darshan of Lord Nataraja with intense bhav gives Mukti.

You can keep this yantra at your office or altar place and do the pooja. . You have to chant this mantra for 21/108 times and with the energy of chanting you would be blessed with the positive energy of Chidambara Chakra Yantra.