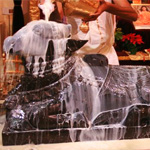 Pradosham is a significant day to worship Lord Siva and his consort Goddess Parvathi. Pradosham literally means the removal of sins. These times are the windows of opportunity to remove karma or karmic energies that limit our potential in this current life. Pradosham, which is the thirteenth phase of the dark or bright moon, is the time designated for Lord Shiva to remove the bad karma of people. It falls on the the 13th day(Trayodasi) of lunar(moon)cycle and hence falls two times in a month, once in the waxing period (New Moon Day- Amavasaya) and once in the waning(full Moon Day- Pournami) period. Sri Kurungaaleeswarar is a temple where Pradosham takes place every evening.

An auspicious day dedicated to Lord Shiva, Pradosham falls on the 13th day (Trayodashi) of the lunar fortnight (Paksha). Pradosham Vratam occurs during the two different phases of the moon (waxing and waning) as per the traditional Hindu lunar calendar. A Pradosham falling on a Monday is called Soma Pradosh or Chandra Pradosh, on a Tuesday is known as Bhauma Pradosh, and on a Saturday is called Shani Pradosh. Among all the Pradosham vrats, the Soma Pradosh and Shani Pradosh are the most significant one observed by most devotees.

Pradosham literally means the removal of sins. These times are the windows of opportunity to remove karma or karmic energies that limit our potential in this current life. Pradosham, which is the thirteenth phase of the dark or bright moon, is the time designated for Lord Shiva to remove the bad karma of people. There are two Pradosham days in a month. There is only one temple where this daily Pradosham is very effective because of its association with Nandi, the bull of Lord Shiva. The bull was sent to the earth plane to initiate the daily removal of sins at the temple called Koyampet near Chennai. Participants of the daily karma removal program will have an archana ceremony done for them on daily basis during the Pradosham time (sunset).

All Pradoshams occur between 1-1/2 hours before and right up until the moment of sunset in the time zone where you are living physically.

A Pradosham period is considered to be very auspicious. The name Pradosh indicates the twilight period, that is, the period just before sunset and immediately after sunset. We can pray to God by performing abhishekam. Milk gives long life. Ghee gives moksha. Sandal gives Lakshmi's grace and there are lots more. Generally, the twilight period is aound 1.5 hours before sunset i.e from 4.30 P.M to 6.00 P.M. During this period, the devotees are aware that Lord Shiva and Mother Parvati are at their best cheerful mood. Anyone asking for blessings and offerings are highly blessed by the couple during the Pradosham period.

These Pradoshams occur twice each month - on the 13th (Trayodashi) moon day after the New Moon and after the Full Moon.

Pradosha vrata is a vrata (Fast) of Lord Shiva and Mother Parvati. The Pradosha worship is done in the evening twilight on the Trayodashi of both lunar fortnights (Shukla and Krishna Paksha). These are the 13th tithi, or lunar days, from the New Moon (Amavasya) and Full Moon (Purnima).

The Pradosha worship is to be done in the evening twilight on the thirteenth day of each lunar fortnight. It is the worship of Lord Shiva for victory and success in all undertakings, and the fulfillment of all your heart's cherished desires. When you desire to obtain a favor from a superior person, don't you naturally approach him at a moment when he is likely to be in a very pleasant frame of mind? You will perhaps see him after he has had a good dinner and is happily chatting with a friend in a hearty, expansive mood.

Pradosham is the worship of Lord Shiva and Mother Parvati when they both are in an extremely propitious mood. Repeatedly worsted in war by the demons, the devas approached Lord Shiva to bless them with a leader for their celestial hosts. They came to the Lord at twilight on the thirteenth day of the lunar fortnight and found him in the blissful company of his consort, Mother Parvati. Hymned and glorified by them, Lord Shiva immediately granted their prayerful request. Hence, the extreme auspiciousness of the period.

A very important point to be remembered in this connection is that during this auspicious period all the hosts of celestial beings and devas come down from the heavens and attend the worship in their subtle forms. This adds immensely to the sanctity of the worship.

It is said that on the Trayodasi (thirteenth moon day) day, the devas and demons realized that they had committed a sin of not praying to lord Shiva and prayed for forgiveness. Lord Shiva forgave them and danced in between the horns of the Nandi's forehead. This time is called Pradhosham. It's said that if anybody prays Lord Shiva in this time, he/she fulfills their wishes and gives them mukti.

The Shiva Purana states that one who performs abishkeam and pooja to Lord Shiva on Pradhosha will be blessed with wealth, children, happiness and honor. The fasting and worship is specially undertaken by women who long to have children. It is said that those praying to Shiva during the auspicious time of Pradhosha will be freed from sins.

Lord Shiva drank the Halahala poison that was churned up from the Ocean of Milk (Samudra Manthan) during Pradosham. Lord Shiva and Devi Parvati are in a propitious mood during the evening twilight on the Trayodashi day and hence are easily pleased and grants whatever that a sincere devotee asks.

What is Shani Pradosham?

Shani Pradosham - When 13th Moon-day falls on Saturday. The planet Saturn is considered an Agent of Karma who delivers many of life's tougher lessons to help us refine and evolve our souls. Pradosham time are measured by the phases of the Moon.

Shani Pradosham - When 13th Moon-day falls on Saturday is the supreme level for worshipping Lord Shiva.

Lord Shiva has more influence over Saturn (Shani-dev) on this day and can cause Saturn to loosen or release some of the karmic bonds that limit us. It is also thought that the first Pradosham was on a Saturday and observing this time transports us back to time of the Churning of the Milky Ocean.

When a Pradosh falls on a Saturday, it is termed as Shani Pradosh. To overcome the bad influence of Shani, devotees observe a vrat on Shani Pradosh and offering prayers to Lord Shiva during the day.

You can perform Mantra Writing 1008 or 10008 times to Lord Shiva "Thiru Neela Kantam" on this pradosham day reduce your sins.

How to observe Soma Pradosham?

A Pradosha occurring on a Monday is known as Som Pradosh or Soma Pradosha. Monday, also known as Somwar, is dedicated to Lord Shiva, hence, the name Som Pradosh. Also it is the day ruled by his consort, Mother Parvati who rules over the Moon. The Moon rules emotions and emotions influence thought. Karma is created by thought. Observing a fast on a Monday is associated with offering prayers to the lord asking for a good and loyal spouse. Also the vrat assists in attaining prosperity and a peaceful family life.

A Pradosha falling on a Monday is considered to be very auspicious. The Moon rules your mind and controls your emotions which is why many people are advised to wear the Moonstone to ease their anxiety and worries. Controlling your mind first involves erasing your negative karmas. Karmas are invisible signatures marked in your spiritual books. They represent your actions and deeds, both good and bad.

The ruler of the Moon is Lord Shiva's wife, Goddess Parvati or Shaktidevi. She is the mother to whom we all pray and a powerful complement to Lord Shiva. Lord Shiva wears the crescent moon in his head and controls the waxing and waning of the Moon. Lord Shiva is the master of time in one of his forms, the Kala Bhairava. Lord Brahma and Lord Vishnu often prayed to Lord Shiva. In fact, Lord Shiva is so powerful that he once cut off one of the heads of Lord Brahma when he saw that he was getting arrogant about his power. From that day, Lord Brahma has only four heads, instead of five.

Lord Nandi is occupying a very vital place in front of Lord Shiva. Praying to Shiva, Shakti and Nandi on any day is wonderful, but praying to them on Soma Pradosham with sincerity in your heart destroys your negative karma and helps you to control your mind and in turn remove your anxiety.