Receive Blessing from your Ancestors 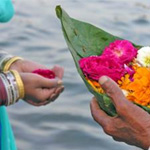 Tharpanam means "That offering which satisfies". But what we mean by the word Tharpanam is the offering of water mixed with gingelly to the manes.(dead ancestors).Though we have several ancestors, this offering is addressed to three generations of father, grand father and great grandfather along with their wives in our family and maternal grand father, his father and grandfather along with their wives in our mothers birth family. Only those whose father is dead are eligible to do Tharpanam.

Sri Ram Himself did tarpanam for His father Dasaratha and His Soorya dynasty ancestors at more than 108 of these Pitru Moksha ancestor salvation sacred spots in Tamil Nadu alone. These include Rameswaram, Nedungudi, Thilatharpanapuri, Innambur, Theerthandapuram and Kekkarai just to mention a few. Considering the whole of the holy land of India, there are more than 1008 Pitru Mukti kshetras including the well known ones such as Varanasi, Prayag, Gaya, Kedarnath and Badrinath.

All the manes are supposed by our religion to live in the Pithru loka for some time and either be reborn as any being or go to lokas like deva loka, Vaikunta etc or even attain salvation by getting mixed with god. The pithru

loka is populated by three group of pithru devas viz, Vasu, Rudra and Adhithya. These devas receive our oblations and make it reach to our manes wherever they are and in whichever form they are. The pithru loka is supposed to be on the unseen side of the moon. This portion gets exposed to sun on the new moon days. It is according to our concept lunch time for the people populating the pithru loka. These pithrus, since they have left the world are solely dependent on only their progeny to feed them. This feeding is done through Tharpanam. It is believed that if Tharpanam is not done out Pithru devas will curse us so that we may not have male descendents to offer tharpanam to us. Tharpanam can be performed in Thila Tarpana Puri Temple (Sithalapathi) Thila Tarpana Puri is the place where we can perform Tharpanam and This place is considered equivalent to Kasi or Rameswaram. Performing tharpanam here on Amavasya day is considered special. This is a Mukthikshetram (salvation). Like Srivanchiyam, it is believed that the sinned will not be able to visit this temple and a planned visit to this temple is not possible.

The shrine for Adhi Vinayakar (also known as Nara mukha vinayakar) is just outside the main temple. Here you can see Ganesha with a human head and hence the Naramukha vinayakar. This place is also known as Sithalapathi. The story of Shiva beheading Naramukha Vinayaka who was created by Parvati and then replacing the head with an elephant head is well known. What is less known is, Shiva had instructed his troops to fetch the head of anyone found sleeping with his head placed towards North. They found this elephant sleeping with its head towards North. This is probably one of the reasons why we are forbidden from sleeping with our head pointing towards North. Shiva named the boy Ganapati - meaning commander of his troops and granted a boon that Ganapati shall be worshipped by everybody before starting anything new.

For those who are not able to do Tarpanam on this auspicious day, we are arranging a proxy to represent you, he will do the procedure on behalf of you at Thila Tarpana Puri Temple (Sithalapathi). You have to give the Name, Birth star, and Rasi of the person you are offers Tarpanam. By utilizing this service you are ensured with the blessings and wishes of your ancestors.