Pratyangira Devi - Protect us from all Terrible 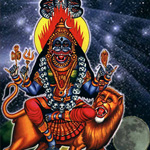 Pratyangira comes from a deep, deep place within the Divine Mother; an area simply known as the Void. In the Void there are no thoughts of fear, or pain, or loss, or want, or time, or even space… just the warmth of the Mother's love. Seeing Pratyangira in any form was considered an enormous blessing, and an indication that you were in similar company.

Sri Maha Pratyangira Devi is a powerful aspect of divine mother. She is considered to be a powerful repellent of the influences generated by witch-craft. Terrible in aspect, having dark complexion, reddened eyes and in four hands she hold a trident, a serpent in the form of a noose and a hand drum. Her hair strands at the ends. As Pratyangira energy manifests, it's often a very swift and sometimes ferocious current. This combination of lion and human forms is said to represent the balance of good and evil. Many of the Saints who've seen its energetic expression have described her as a 1008 headed (symbolically representing the 1008-petalled Sahasrara Chakra, the universal chakra of the cosmic energy) and with 2016 hands, riding majestically on a chariot pulled by 4 lions (representing the 4 Vedas), lion-faced mother, armed with many swords for removing obstacles. The jaws of so many lions make it very powerful for destroying negative karmas, and a great help to anyone on a spiritual path. Though such a current can be understandably rough and it's wise to approach with respect and some consideration of what our heart is asking for, it's with that same intensity that Pratyangira radiates her love, so it's best to also be open to deeply receive.

Sri Maha Pratyangira Devi is a powerful Devi who is said to have destroyed Sarabheswara's arrogance. Sarabheswara is an ugra avatar of Lord Shiva. Lord Vishnu took the ugra avatar Narasimha to destroy evil. By drinking the blood of rakshas (demons), Lord Narasimha was in a destructive mood which made everyone tremble. Lord Shiva came to pacify him but could not succeed. Then Lord Shiva took the form of Sharabheswara - a bird and human combination. One wing was Devi Shoolini and other was Devi Pratyangira. Lord Sharabheswara's efforts and Devi Shoolini's efforts could not control Lord Narasimha. Devi Pratyangira was released from his wings and took the female form of Narasimha and calmed down Lord Nara Simha. She is also known as Narasimhika [in Kalisahasranama Stotram).

The Pratyangira aspect of the Divine has been a bit of a secret for most of these past ages. Many believed that direct experience with this energy was reserved for Saints and Rishis. Two Rishis in the ancient times, Pratyangira and Angiras, in their deep meditation, discovered this goddess through her Moola Mantra in the ethereal waves of the sound current. And though this Mother is nameless, she honored these Rishis by giving the blessings to be named after them. She has hence been known as Sri Maha Pratyangira Devi.

Pratyangira comes from a deep, deep place within the Divine Mother; an area simply known as the Void. In the Void there are no thoughts of fear, or pain, or loss, or want, or time, or even space… just the warmth of the Mother's love. She is enveloped as bliss in the letter "Ksham".

Pratyangira sadhana is done mainly to protect yourself from attacks of black magic and to prosper in your life. It will help people who try to achieve Moksha (Final liberation). Advantages of this sadhana are too many. It is told that if her mantra is used to harm others for material gains and settle enmity it can react and adversely affect the person performing such rites. Don't use this mantra praying for small reasons. It is a ugra sadhana.

The Mother Goddess is also called 'Artharvana Bhadra Kali', because she is the guardian of our Atharvana Vedam that holds the secret of Mantras Tantras Yantras from good to evil. The most detailed source for worshipping Devi Pratyangira is Meru Tantra. Her Character is straight forward and wherein mistakes are committed by anyone, she is quick to punish them. But she is also quick to forgive one who seeks solace in her and remains a true devotee.

Thus the Mother Goddess, who is Maha Shakthi herself, is the most wonderful mother you can have. 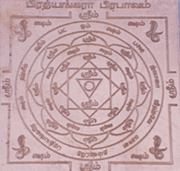 The worship of Devi in Srichakra is regarded as the highest form of the Devi worship.

The power of the Sri Chakra is one such rahasya.

Homam to be Performed

Goddess Prathyangara Devi is worshipped for curing all illness and to prevent major accidents and any health issues caused due to poisoning. It is also believed worshipping this Goddess helps in the removal of all mental blocks.

Poojas to be Performed

It is believed that performing pooja to Shri Prathiyangara Devi, pain, disease financial problems will be solved and enemy can be succumbed. One can get the most wanted sixteen wealth's by worshipping this Goddess. If Devi is worshipped, all the troubles will be warded off. pooja performed with Lemon, dates, crystal sugar (kalkandu) , banana, ghee and flowers are offered to the goddess for pooja, it is believed that the lemon which is placed at the feet of Sri Prethiyangera Devi during the pooja will bring prosperity if kept in one's house.

To best receive the Pratyangira energy, it's helpful to have some understanding of it By writing this powerful mantra. This Vedic Sanskirt chant was given to humanity through the Grace of Sri Bhagavan (GOD) and Sri Amma (MOTHER). When you write or chant this Mantra, even without knowing the meaning of it, that itself carries power. But when you know the meaning and chant it with feeling in your heart then the energy will flow a million times more powerfully.