Every human being strives at is best to prosper in his life. For that, blessing and wealth are very much essential in their life. To achieve this, one has to worship Lord Kubera who is the leader of the Treasure house under the table administration of Goddess Lakshmi, Source of wealth Kubera distributes or showers who worship him sincerely and also with full of honesty and belief. This same Kubera to his credit all the nine rivers do come under his control. To know more about Kubera is said to have given a loan to Lord Venkateshwara for his marriage with Padmavati. According to the Vishnupuran the repayment will go on till the end of Kaliyuga.

It is said that one who worships Kubera and Lakshmi together can never fall short of money and material comforts. By worshiping Goddess Lakshmi and Kubera together brings prosperity to the devotee by drawing new avenues and sources of income. Even though Lakshmi and Kubera are to energies / Power / and leaders of wealth, Kubera's wealth is very well mentioned in Rigveda. He is the store house of all prosperity and takes highest responsibilities. The special puja of Kubera is performed on Dusshera, Dhan triyodasi and Deepawali, asking for prosperity and his blessings.

Lakshmi is the Hindu goddess of wealth, prosperity, light, wisdom, fortune, fertility, generosity and courage; and the embodiment of beauty, grace and charm. She is believed to protect her devotees from all kinds of misery and money-related sorrows. Representations of Lakshmi (or Shri) are found also in Jain monuments.Lakshmi in Sanskrit is derived from its elemental form lakS, meaning "to perceive or observe".This is synonymous with lakṣya, meaning "aim" or "objective". Lakshmi is thus goddess of the means to achieving objectives, including prosperity in the lives of humankind.She is the consort of Vishnu[ and married Rama (in her incarnation as Sita) and Krishna (as Radha and later Rukmini).

When Kubera went to Kailasam once to have a darshan of Lord Shiva, he found Him with Goddess Parvathi. Kubera was stunned to see the splendour and beauty of Goddess Parvathi. He felt sorry that he had not worshipped such a fine goddess for so long and one of his eyes shut itself.

Goddess Parvathi got angry that Kubera was winking at Her, and looking at Her with evil intention. She made his eye burst. Kubera lost sight in one eye and was also cursed that he would always look ugly. Lord Kubera pleaded with Lord Siva to forgive him and explained that he had not seen the Goddess with any evil intention. Lord Siva left the choice to His consort. Goddess Parvathi forgave Kubera and let the eye grow back, but it was smaller than the other one.

So one eye of Kubera is smaller than the other. Kubera was rewarded by Lord Siva with the post of being one of the guards of the eight directions - the North. The Goddess made him the lord of wealth and material.

As the God of wealth and material, his responsibilities are to distribute them while creating wealth is with Goddess Lakshmi. Kubera is mostly painted with his family and seen showering gold coins and navaratnas. 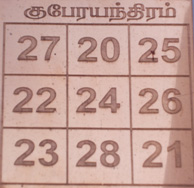 With this Yantra, one can gratify Lord Kuber and thus receive auspicious blessings leading to a favorable impact on the wealth of one's life. It is believed that possessing and then worshipping this Yantra is equivalent to praying Lord Kuber in person if done with complete dedication and devotion. All money related problems would surely disappear by using this Kuber Yantra according to Hindu mythology.

This square shaped Yantra is found in nine equal blocks and is divided in 6x6 dimensions. One particular feature that helps in finding out the authenticity of a Yantra is that all the columns and rows including the diagonal ones count to 72. The number is considered influential on the monetary aspect of life. Kuber Yantra is an auspicious tool that is believed to possess the divine blessings of Lord Kuber. 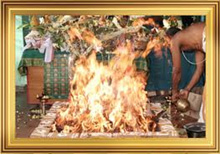 Lakshmi-Kubera Homam is performed for the purpose of gaining legitimate wealth. Those who are involved in business or are facing financial problems may perform this Homam to receive the blessings and grace of Goddess Lakshmi. The yantra (a symbol embedded in metal) used in the Homa, will invoke riches dispelling any curse or obstacle in obtaining the same. By performing this homam customer will receive Lakshmi Kubera yantra 6x6 inches which is energized in homam along with prasad.

Performing pooja to Lord Kubera is believed to enrich one's life. To have a wealthy and comfortable life, one has to perform Sri Lakshmi Kubera Pooja.