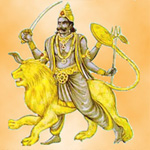 Rahu is not an actual planet. In reality, it is an intelligent concept unique to Indian astrology. The two nodes where Earth's trajectory round the Sun, and Moon`s trajectory around the earth intersects are named as Rahu and Ketu. Consideration of these two Lunar nodes/imaginary planets lends more precision to analysis in astrology. Rahu is considered to be a Shudra graha, which rules illiteracy and uncultured people. In horoscopes it is considered to be a malefic planet, which signifies thieves, witches, magicians, venom, snake, jails, cemeteries, spies, criminals, terrorists etc. People dealing in occult, especially dark magic are deeply influenced by this planet. Rahu is similar to Saturn in its effects. Hence Rahu can also subject one with unexpected losses, frustration, failures etc, if not placed in the advantageous position.

At the same time, if in favour of the person, Rahu grants success, unexpected gains, strengthen one's powers and turns foes in friends. Rahu is instinctual and animalistic in nature. It craves for pleasures, and is never satisfied with the gains. Fame, success in politics, money and physical attractions are all granted by this planet. And yet the ambition never seems to be fulfilled. There is no equal to Rahu when it comes to giving Upliftment in Name and Fame, Sudden Luck Gambling, which is probably the reason why Western astrologers regard it as the greatest benefic force. Rahu is the strongest enemy of Sun and Moon.

Rahu is the head part of the celestial snake. This hymn refers to Rahu being snake shaped. The snakes are given great importance in Vedic mythology. Lord Shiva has a snake around his neck, Lord Vishnu's throne was Shesh Naga - the Eternal Serpent. Shesh snake represents the cycles of time and space which the seed of cosmic creation. The snake are shaped like snakes but stand tall. The snake are highly evolved beings. They are wise, but their wisdom can be used for both good and bad. The Naga sheds his skin, this symbolizes transformation, re-birth. The snakes in Vedic literature remind people of their mortality.

Lord Rahu can put us in harmony with collective trends and give popularity, prestige, fame and power. For getting all those divine, one have to perform Lord Rahu pooja. Doing Milk abisekam (especially on Sundays) here for Rahu during Rahu kalam (period of 1and 1/2 hours occurring every day) the malefic effects of Rahu like marriage obstacles, lack of progeny, troubled marital life, Kalasarpa Dhosham, Kalasthra Dhosha , Sarpa Dhosha are all neutralized. During this milk abhishegam, the milk turns blue. Offering of blue cloth and ulutham paruppu (urad dal) is made here. Mantharai flower is considered special to him.