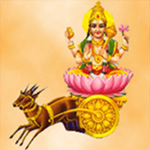 Lord Moon is a Sattvic or spiritual planet. It gives faith, love, openness, surrender, devotion, peace and happiness. The Moon is the vibration who is associated with romance, love, sentiment, motherhood. A weakly placed Moon leads to problems related to body fluids, mental and emotional problems such as frequent depressions and over-sensitivity.

oon God or Chandra is the nearest cosmic neighbor to the planet earth and wields is existence on almost every human being! You have to learn the Vedic methods to get closer to your cosmic neighbor and the only divine way of approaching him is through energetic Pooja flames! Your emotional swings might be a major downfall in your life. Your Moon takes charge over your emotional balance. A lump in your emotional life attributes to the weaker placement of Moon in your Birth Chart. The Moon God or Chandra is the solvent who can dissolve those lumps of your life!

When Lord Vishnu was distributing the Amrutham amongst the devas, at the behest of Sukracharya, one of the asuras in the guise of a deva consumed the nectar. Suryan and Chandran noticed this and complained to Lord Vishnu. An angry Vishnu used his chakrayudham (discus) to cut the asura into two and threw them away. The head joined with a snake's body to become Rahu Bhagavan. The body portion kept growing because the asura had consumed Amrutham.

This later joined with the head of a snake and became Kethu Bhagavan. Now, Rahu and Kethu did not forgive Suryan and Chandran. Rahu went after Chandran and started consuming him. It is here that Chandran prayed to Lord Siva and got his blessings. Shiva blessed Chandran with the power to grow back to full size in 15 days after being consumed by Rahu. That is why we have the waxing and waning moon. Shiva also blessed Chandran by adorning Chandran on his forehead so that anyone who prays Shiva will have to pray Chandran.