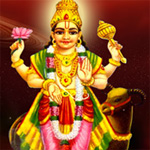 In Vedic astrology Mars is know as MANGAL, ANGARAKA and KUJA. These names in Sanskrit mean, "auspicious, burning coal, and the fair one". Mars is a malefic. Mangala is the god of Mars, the red planet. Mars is also called Angaraka ('one who is red in colour') or Bhauma ('son of Bhumi') in Sanskrit. He is the god of war and is celibate. He is considered the son of Prithvi or Bhumi, the Earth Goddess. He is the owner of the Aries and Scorpio signs, and a teacher of the occult sciences (Ruchaka Mahapurusha Yoga). He is of Tamas Guna in nature and represents Energetic action, confidence and ego.He is painted red or flame colour, four-armed, carrying a trident, club, lotus and a spear. His Vahana (mount) is a ram. He presides over 'Mangal-war' or Tuesday. It measures our ability to project force in life. On the positive side, a strong Mars is necessary to give us the energy, will, confidence and independence--the qualities it shares with Sun--to carry out our endeavors. Without it we have no real interests, passions and motivations, no determination, no real intensity or ability to carry out anything to the end and really accomplish it. For getting all those divine, one have to perform Lord Mars pooja.

Mars also governs blood-related problems, blood pressure, muscles and bone marrow in the body so a malefic influence of the planet is likely to affect the same. Mars plays the role of the protector of Dharma, the sacred path and purpose in life that each of us follows. A strong Mars in the Horoscope give one the energy, will, confidence and independence to carry out our endeavors. Mangal rules over the sidereal signs of Aries and Scorpio. Mars exalts in Capricorn and falls in the sign of Cancer. It is the most comfortable in the 10th House. Mars stays for 1.5 month in each zodiac to complete the cycle in 18 months. The position of Mars is very important in any horoscope.

The Chevvai(Mars) dosham(Malefic effect) caused by unfavorable position of Angarakan or Chevvai(Mars) in the horoscope may manifest as aggressiveness, tendency to get into unnecessary arguments or jealousy in the native. It can also result in loss of money, physical injury or even imprisonment. Chevvai(Mars) dosham is rectified by performing parihara poojas(Appeasement poojas) to this deity. Devotees may perform Angaraka Pooja to get rid of financial crisis. Worshipping Chevvai(Mars) here helps in neutralizing the negative effects. Offerings of red cloth and Bengal gram or kadalai paruppu are made to Chevvai(Mars) here. Tuesdays are special days here as Chevvai(Mars) is associated with that day of the week.