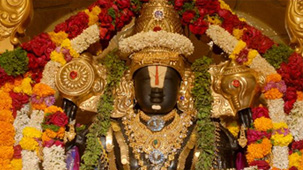 Lord Dhanvantari is known as the father of Ayurveda which is believed to be a branch of the Vedas. The Vedas are the treasure house of knowledge and Atharva Veda is one of the four Vedas that has a Sub-Veda known as Ayurveda, which represents the remedial measures to get rid of diseases. It is a stream of knowledge passed down from generation to generation, much in the same way as the Vedic literature and the Vedic scriptures. Dhanu symbolizes sorrows and hence Dhanvantari means the destroyer of sorrows.

People who worship Lord Dhanvantari by lighting the earthen lamps (Diya) on the threshold of their houses are believed to be blessed with good health and are protected against untimely death. It is believed that worshipping the Lord on Dhanvantari Jayanti would bless the people with good health.

Lord Dhanvantari is worshipped all over India as the God of Medicine. According to legend, the gods and the demons sought the elixir Amrita (ambrosia) by churning the cosmic milky ocean (Samudra Manthan), and Dhanvantari rose out of the waters bearing a pot filled with the elixir. During the churning, many divine objects and beings emerged from the ocean, including Kamadhenu (the wish fulfilling cow), Ucchaisrava (the white horse), Airavata (the white elephant), Kaustubhamani (a rare diamond), Kalpavriksha (the wish fulfilling tree), and Laxmi, the Goddess of Wealth. The birthdays of the Goddess and Lord Dhanwantari are celebrated on the same day. The churning of the ocean of milk is a famous episode in the Puranas that represents the spiritual endeavor of a person to achieve self-realization through concentration of mind, withdrawal of the senses, and control of all desires, austerities and asceticism.

At the time of the churning the milky ocean, Lord Vishnu foretold that Lord Dhanvantari would appear in the world to teach men the science of Ayurveda. After Lord Indra, seeing humanity afflicted by pain and diseases, pleaded with Lord Dhanvantari to descend into the world and as the churning continued, Lord Dhanvantari appeared. He was strongly built, his chest was very broad and his complexion bluish black. He had strong arms, reddish eyes, and moved like a lion. He was clad in bright yellow, his curly hair was anointed with oil and he wore shining earrings made of pearl.

The Dhanvantari Puja is performed to cure all kinds of diseases and illness. Those who are suffering from any disease get this puja done for early recovery. This healing science is generally revealed by great sages or demigods. Occasionally, the Supreme Lord Himself descends as the incarnation Dhanvantari and re-inaugurates the tradition of Ayurveda. Dhanvantari's appearance is celebrated each year on the 8th day (ashtami), 13th day (trayodasi), amavasya 15th day of the waxing moon a few days before the Deepawali., By doing this Puja you can get benefit of health, personality development, over come from disease. You may done this Dhanvantari puja on every Monday also.