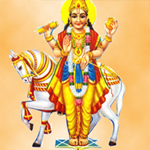 Shukra, the Sanskrit for "clear, pure" or "brightness, clearness", is the name the son of Bhrigu and Ushana, and preceptor of the Daityas, and the guru of the Asuras, identified with the planet Venus (Shukracharya). He presides over 'Shukra-war' or Friday. He is Rajas in nature and represents wealth, pleasure and reproduction. He is of white complexion, middle-aged and of agreeable countenance. He is described variously mounted, on a camel or a horse or a crocodile. He holds a stick, beads and a lotus and sometimes a bow and arrow. In Astrology, there is a dasha or planetary period known as Shukra Dasha which remains active in a person's horoscope for 20 years. This dasha is believed to give more wealth, fortune and luxury to one's living if a person has Shukra positioned well in his horoscope as well as Shukra being an important benefic planet in his/her horoscope.

Lord Venus represents the feminine sprit. She is well known as the Goddess of Love and Beauty. She represents the pleasure of the senses and the comforts of the body. She is sexuality and sexual attraction and serves to make the person attractive to the opposite sex. She is beauty, style and elegance-the refinement of wealth and not just crude accumulation. Her concern is not just with quantity, but with quality and good taste. To attain success in love , and mesmerizing beauty one has to perform this fire Labs. Luxury can be yours completely when the Lord Venus blesses you. He can lay the foundation of your financial life. Catch him early, gain his blessings and sway in luxury!

Lord Venus or Shukra is the financier in the world of planets. He is the only planet who gifts you with material comforts and kingship to rule your life with financial satisfaction. Not everyone is blessed with his radiations and that's the reason behind the financial instability of many of us. Appeasing him and approaching him the right way will make you proud of your financial status-in a nutshell a complete you, in today's world!

We Nadi Astro online would help you in performing Shukra (Venus) Homam and ease to invoke these powerful radiations of Shukra who can bless you with prosperity, health and wealth!