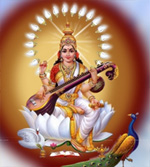 Saraswathi Devi is the consort of Lord Brahma, the creator of Universe, and is the embodiment of knowledge and arts. It is only with the help of Saraswathi Devi's knowledge, Lord Brahma created the universe and its beings. Among her other renowned names, Saraswathi Devi is also known as Kalaivani, bestower of arts, and Vagdevi, Godess of speech and sound. In India, the name Saraswathi is synonymous with education and knowledge. Children are initiated to read and write alphabets only on Vijayadasmi as the blessings of Saraswathi Devi are abundant on this auspicious day. Moreover, whatever deeds one undertakes on this day turns out to be victorious. To please such popular and great Saraswathi Devi and win Her love, affection and blessings, Saraswathi Homam is a simple but very potent way.

To realise the power of knowledge, speech, creativity and other boons of Saraswathi Devi, performing Saraswathi Homam on Thursdays, Fridays and on Panchami Thithis and Guru Horas are best recommended. Whether you seek to overcome speech impediments or wish to still a massive crowd with your influential speech, Saraswathi Homam can fulfill your desires. Since Saraswathi Devi, as the goddess of speech and sound, resides on the tip of your tongue, She has this special grant to effectively enhance your communication skills. Therefore, Saraswathi Homam is a highly beneficial tool for politicians, orators, businessmen, celebrities and all those who want to touch the peak of their career/professional life.

We Nadi Astro online would help you in performing Saraswathi Homam and ensures that all your desired goals and needs are fulfilled.