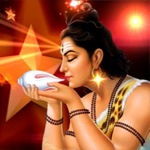 Markandeya, a devotee of Lord Shiva, was destined to die at an early age of sixteen. As he constantly invoked the blessings of Lord Shiva through Maha Mrityunjaya mantra, Markandeya was saved from his destined time of death and was endowed with eternal life. Mrityunjaya Homam is an effectual technique to appease Lord Shiva as Mritunjaya and win His abundant mercy and grace to overcome death. The most prominent offerings made while conducting Mrityunjaya Homam are Durva grass, sesame seeds, amrita herb, etc., which have high medicinal properties. So performing Mrityunjaya Homam relieves you from your health ailments and rejuvenates your body, mind and soul. This life-giver-homam is specially recommended for people suffering from terminal illness, accidents and other life threatening diseases as it improves their longevity and restores health. For aged-people in their death bed, Mrityunjaya Homam offers the possibility of extending their life time.

Mrityunjaya Homam can be conducted on any auspicious hours or as recommended by the preist. For pleasing Lord Shiva as Mrityunjaya and receive all His blessings and grants We Nadi Astro online would help you in performing Mrityunjaya Homam.