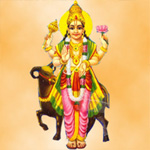 Mangala is the god of Mars, the red planet. Mars is also called Angaraka ('one who is red in colour') or Bhauma ('son of Bhumi') in Sanskrit. He is the god of war and is celibate. He is considered the son of Prithvi or Bhumi, the Earth Goddess. He is the owner of the Aries and Scorpio signs, and a teacher of the occult sciences (Ruchaka Mahapurusha Yoga). He is of Tamas Guna in nature and represents Energetic action, confidence and ego.He is painted red or flame colour, four-armed, carrying a trident, club, lotus and a spear. His Vahana (mount) is a ram. He presides over 'Mangal-war' or Tuesday. It measures our ability to project force in life. On the positive side, a strong Mars is necessary to give us the energy, will, confidence and independence--the qualities it shares with Sun--to carry out our endeavors. Without it we have no real interests, passions and motivations, no determination, no real intensity or ability to carry out anything to the end and really accomplish it.

According to Vedic astrology, planet Mars is the symbol of energy and vitality. Mars triggers one's emotions and stability in life. If you prefer to be comfortable in your own skin and explore an avenue to display your talents appease the Kuja-he can formulate your courageousness and shower you with providential help. Mars who represents your stability and emotions in your Birth Chart. If you want to feel the best in who are you, then you must stay connected with the Divine propitiator! Your happy and hitch free married life will be attributed to the strong Mars. He will equip you with powerful radiations that can unknot your financial problems, relationship problems and anger attacks. If your Mars is strongly placed, you will maintain the best of relations with people around and will turn out to be a unique in your kind.

We Nadi Astro online would help you in performing Mangal (Mars) Homam and ease to invoke these powerful radiations of the Mars make you the most unique of your kind!