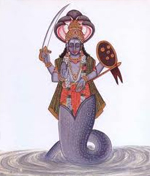 Ketu is the Lord of Descending/South lunar node. Ketu is generally referred to as a "shadow" planet. He is considered as Tail of the Demon Snake. It is believed to have a tremendous impact on human lives and also the whole creation. In some special circumstances it helps someone achieve the zenith of fame. He is Tamas in nature and represents supernatural influences. Astronomically, Ketu and Rahu denote the points of intersection of the paths of the Sun and the Moon as they move on the celestial sphere. Therefore, Rahu and Ketu are respectively called the north and the south lunar nodes. The fact that eclipses occur when Sun and Moon are at one of these points gives rise to the story of the swallowing of the Sun and the Moon.

Lord Ketu is regarded as a point of difficult Karma from a past life in which the individual furthered his own selfish interest at the expense of others. Lord ketu is, on the positive side, can develop strong concentration and mastery of obscure or arcane subjects. Lord Ketu gives sudden and unexpected results for good or bad. On the spiritual front Lord Ketu gives perception, liberation, wisdom and psychic sensitivity in a more genuine way. Rahu and Ketu were a single entity-in their grief to drink the immortal nectar during the churning of milky ocean; they were found in the disguise of lord themselves. Knowing this, Lord Shiva cut them into two pieces; one Rahu and the other Ketu. Lord Ketu blesses his natives with a peaceful life, all the knots and lumps cleared on the pathway of life.

You will lead a trouble free life-trouble free in every aspect of life, financially, physically and mentally. Bad things fear to approach the natives blessed by Ketu. Be one among those by gaining is grace! When you are free from troubles in all aspects of the world, what more is considered as healthy living? Invoke the radiations of Lord Ketu to lead the most peaceful life on earth! It's time others envy your life-all with the blessings of Lord Ketu!

We at Nadi Astro Online would help you in performing Rahu Homam and ease to invoke these powerful radiations of Lord Ketu who can in turn bless you with peace in life!