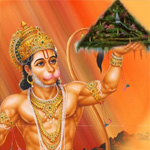 Hanuman, also known as Anjaneya or Maruti is said to be the divine body guard and most pious devotee of Rama. He has a power to solve all your problems if you let him know that you confide in him for all your problems of life! This divine protector can keep away every hassle from your way, making your life a cake walk!

Lord Hanuman, the most pious devotee and follower of Lord Rama in the eternal world is believed to be the ever existing protector for the human race. When approached humbly and deep heartedly he can make your life the most cherishable one ever. All your health struggles and life problems will come to an end if you pray to him and invoke his presence in your living space. He can also keep you away from the evil eye casting issues and other evil powers that approach you-he is very powerful in his form!

There are five ways of prayer to the Lord. They are Naman, Smaran, Keerthanam, Yachanam and Arpanam. The five faces depict these five forms. Lord Hanuman always used to Naman, Smaran and Keerthanam of Lord Sri Rama. He totally surrendered (Arpanam) to his Master Sri Ram. He also begged (yachanam) Sri Rama to bless him the undivided love. The pancha mukha hanuman is rare idol of Hanuman.

Being the most secured human being in the world will be the first benefit you attain on sincerely praying to Lord Hanuman. There are many legends and interpretations to this. Protection against anything evil and negative is guaranteed with success in the lane of life! The relationship between Shani and Maruti has been explained earlier in point 'Shani and Maruti'. Hence when there is an influence of Shani, to reduce the resultant/resulting suffering Maruti is worshipped.

We Nadi Astro online would help you perform Hanuman Homam and ease to invoke these powerful radiations of Lord Hanuman who can wade away your problems once and for all!