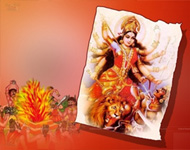 Goddess Durga, the most powerful Goddess is the evil destructor! Whatever is ill in your life-health, enemies or ill luck, she can fade away all your problems at once and for all. Ask the blessings of Goddess Durga to stay away from the hassles of your life.

People afflicted with Rahu and Kethu Doshas worship at this temple during Rahu Kalam; for, it is believed that during the Rahu Kalam, Rahu worships the Goddess everyday. Worshipping Her on Tuesdays, Fridays, Sundays, New Moon days and Full Moon days and Ashtami and Navami (8th and 9th day from the new moon or full moon day) is considered special. Worship of Goddess Durga is considered very important in Kaliyuga. The worship of Goddess Durga removes the effect of all types of black magic, unfavorable effect of negative planets, Bad luck, health problems, problems due to enemies etc. She can solve problems and is the favorite and most dependable God to the women folk. She blesses women with the power to stand against evil in their way and also blesses the childless with the gift of children.

You can attain the blessings of this powerful Goddess who can bid farewell to your problems and hassles and make you live an obstacle life. Ask for anything positive against the negative and she will be with you on calling her with heart and soul.

Nadi Astro Online would assist you in performing the homa (fire rituals) and ease to invoke these powerful radiations of Goddess Durga to rule your life without any obstacle on your way!