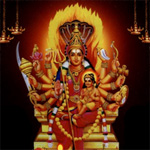 Chandi Homam is the most powerful and vigorous Homam of all Homams. Lord Chamundi/Chandi, another fierce form of Shakti evil destructor! Whatever is ill in your life-health, enemies or ill luck, she can fade away all your problems at once and for all. Ask the blessings of Goddess Shakti to lead the best life ever.

This homam also helps a person in getting victory over Enemies and in Court Cases. In this homam, an elaborate Puja and Homam are done for Devi Durga.In this Homam, Goddess Durga is worshipped as a 2-10 year old Kanya (Girl) and hence girl child of the age mentioned earlier are worshipped during this puja and homam. All the other forms of Devi Durga are also worshipped during this Chandi Puja and Homam.A Chandi Homam is an ultimate prayer to Maa Durga (also known as Maa Chandi) which can be extremely beneficial to us for removing all kinds of Obstacles and help us achieve our goal in life by solving all our problems in life as per Ancient Vedic Texts.

Maa Chandi is a very powerful and fierce deity. She is the primordial energy that is responsible for the creation, maintenance and destruction of the entire universe. She is the overall total of energies of all beings of this Universe. Performance of a Maha Chandi Homam frees a person from all kind of Black Magic, Evil Eyes, Obstacles, Negative Energies, Evil deeds against him and he is blessed with a long lasting Health, Wealth and Prosperity. Shakti si the consort of Lord Shiva and represents herself in many ways-right from the subtle form till the most fierce form. When the natives and devotees seek her with a divine heart and for a true purpose, she will be there for your assistance.

This chandi Homam is not a ordinary homam and it will be performed by dedicated set of 9 priest. In this Homam Goddess Durga Special Mantra is chanted and followed by Homas and rituals which are mentioned below for 2 days.