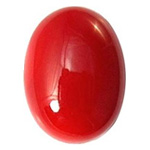 The Gem Stone of Mars

The gem stone representing positive powers of the planet Mars according to Vedic astrology and Navagraha gemology is Red coral.

Mars is also known as Mangal, Kuja, Angaraka, Bhoomi putra and chevvai. It is the planet of courage, Initiative, vitality, vigour, aggression and controls the blood system in the body. Mars is the commander of the army of gods.