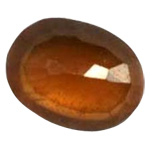 The Gem Stone of Rahu

The Gemstone representing the Planet Rahu as per Indian astrological and gemological texts is known as Hessonite or Gomedehaka or Gomedh. It is the color of cows fat. Certain sages are of the opinion that it is the color of cow's urine. Generally honey coloured Hessonites are used to strengthen or pacify the planet Rahu. Rahu is the north node of the moon represented by the upper half of the snake. The planet Rahu has got karmic influences and generally accepted during the periods when Rahu is operating individuals would get results as per their karma - good or bad in the previous birth. Rahu is the significator of success or failure in politics, deep seated complexes or anxieties, fear and irrational behavior, trouble by life forms like spirits or ghosts, recurring bad dreams and Nightmares, instability in profession, communicable diseases and diseases such as leprosy, poisoning of any kind, dementia, attack from reptiles and wandering. The Planet also causes Major doshas such as kalasarpa dosha, sarpa dosha, Kalathra dosha, Putra dosha. He is also the significator of material gains and wordly desires barring certain specialized cases like the kalsarpa dosha, sarpha dosha, Hessonite is not worn generally throughout the life, it is generally worn when the major period or sub period is operating.