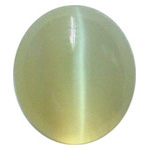 The Gem Stone of Ketu

The gemstone representing as per the Indian astrological and gemological texts is knows as Cat's Eye, Lehsunia or Vaiduria. As per sacred texts two color variants are to strengthen or pacify the planet ketu.

Kanak Khet
: Cat's eye is greenish golden or having a yellow hue.

It is a obaque gem hot in constitution. Ketu is the south node of moon represented by the lower half of the snake. The planet ketu has got karmic influences and it is generally accepted that during the periods when ketu is operating individuals would get results as per their karma - good or bad in the previous birth.

Ketu is similar to Mars. Ketu is the planet which desires spiritual desires and tendencies. A well posited ketu in its planetary periods provides spiritual enlightment and feeling of detachment from worldly desires . This planet is also a significator of success in occult sciences, intuition, success in occult sciences, institution and moksha or ultimate salvation or freedom from the cycle of birth and death.

It is also a significator of spirits or ghosts, recurring bad dreams, frequent travel, major doshas such as kalsarpa dosha, sarpha dosha are caused by this planet. An inauspiciously posited Ketu indicates sudden or wasteful travel, harm due to wrong occult practices and sudden closure of business.