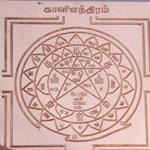 Goddess Maha Kali, the well known fierce Goddess and the killer of demons is but the only source of lifetime protection. Her vigor, vitality, fierceness and ferocious incarnation are to keep away a term called evil eye and ill casts against the world. Kali yantra is very powerful yantra, and is for the worship of goddess kali. This yantra has occult powers & it's worship reverse the ill-effects of black magic, and frees a person from the bad influences of spirits and ghosts.

When you thoroughly believe in her, there is no other protection or insurance needed for your lifetime. This yantra also eliminates the harmful effects of malefic planets, especially Saturn, which are usually responsible for misfortunes, sufferings and sorrows in life. Kali yantra bestows spiritual power and results in fulfillment of desires and increase in wealth and comforts of life. This yantra is also a time-tested remedy against chronic diseases like blood pressure, paralysis and nervous disorder. Kali yantra is very powerful and tested yantra. When her most powerful mantras are chanted and the divine copper plate is charged in the right manner, it can be your protector through life keeping you away from all negative forces on the earth!

You can keep this yantra either in your house, office or altar place and do the pooja. . You have to chant this mantra for 21/108 times and with the energy of chanting you would be blessed with the positive energy of Kali Yantra.